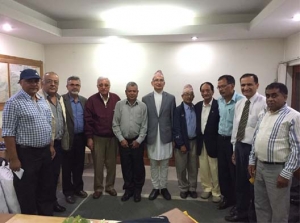 Chairman Mr. D.B. Koirala welcomed and expressed sincere thanks to Secretary Mr. Adhikari for all the support we have been receiving from the Ministry of Culture, Tourism and Civil Aviation since long time. During the meeting HRA Patron Mr. Tek Chandra Pokharel highlighted the history of HRA’s establishment and its struggle. Likewise, Advisor Mr. J. B. Singh and Chairman, Mr. Koirala requested to increase the amount of financial support provided by ministry to HRA.  Chairman also mentioned some problems faced by HRA such as difficulty to achieve the non tourist visa for the HRA volunteer doctors and financial problem to run HRA-Everest ER Clinic at Everest Base Camp. Advisor Mr. Bikram Pandey also informed that HRA is well know organization in international tourism than in Nepal.

At the end, Secretary Mr. Adhikari appraised the work done by HRA and had assured to provide maximum support to HRA in the days to come.